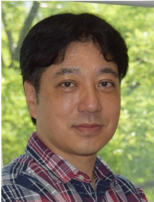 【Purpose of the Research Project】
There exist critical moments, such as the ‘Big Bang’ where “something out of nothing gets created” or in the future, when artificial intelligence might become greater than human intelligence. These points are called singularities. In the field of biological science, discontinuous critical phenomena are broadly seen, for example, the emergence of life from the primordial soup, or the evolution and outbreak of diseases. It has been indicated that only a small number of core elements are required to bring about discontinuous changes to an entire multi-component system. However, the mechanism-of-action that generates such singularity phenomena is not yet certain. In our research project, to look deeply into singularity cells, we are developing an imaging platform that will achieve both wide field-of-view high-resolution imaging and high-speed long-term imaging, and corresponding information analysis methods. This will enable us to be at the cutting edge of new scientific fields, where we uncover the underlying mechanisms for the generation of singularity cells as well as their biological functions.

【Content of the Research Project】
In order to study the processes that singularity cells, considered as minority entities, bring criticality to an entire system (ex: an organ or whole body), it is necessary to measure, analyze, and examine such biological systems in a holistic spatial-temporal manner. For this purpose, an imaging system is required for visualization of molecules, cells, and organsacross different length scales. In order to achieve this, we will organize a core team under a research management team to develop a unique machine we call AMATERAS (A Multi-scale/modal Analytical Tool for Every Rare Activities in Singularity) which allows us to capture macroscopic spatiotemporal dynamics with microscopic precision: not only the composite trees but also the whole forest. In addition, we will organize the following three groups to develop authentic trans-scale analysis that plays a role to seamlessly link from micro to macro. Group A01 will develop and integrate techniques to measure and control singularity cells from the stand point of optics and molecular engineering. Group A02 will construct a theoretical framework to identify singularity cells and to verify the causality based on information science. Group A03 will unravel the biological significance of singularity cells by verifying causality which is elicited from individual biological models. By conducting this kind of circulative collaborative research, we will create the research field “singularity biology”, with reference to its universality.

【Expected Research Achievements and Scientific Significance】
We will develop an unprecedented integrative device for measurement and analysis, AMATERAS, and will establish a research platform covering not only academia but also several relevant companies. From the effective operation of AMATERAS, which includes the acceleration of large scale cross field research among optics, molecular engineering, mathematical biology, information science, biology, and medicine, we expect to largely contribute to the development of innovative devices, the construction of new information processing theories, and early diagnosis to facilitate and intervention in the case of disease. By creating an alliance network with AMATERAS at its core, we will promote industry-academia collaborations. Moreover, this network will contribute to the development of human resources and foster next generation young leaders with full knowledge in different fields through holding international training courses and symposiums specializing in trans-scale measurements and analyses.

【Key Words】
Singularity phenomena: Phenomena that discontinuously and dramatically change the dynamics of an entire system in multi-cell society, where organs and individual bodies are constructed from large number of cells. We call the minority cells that trigger the changes “singularity cells”.